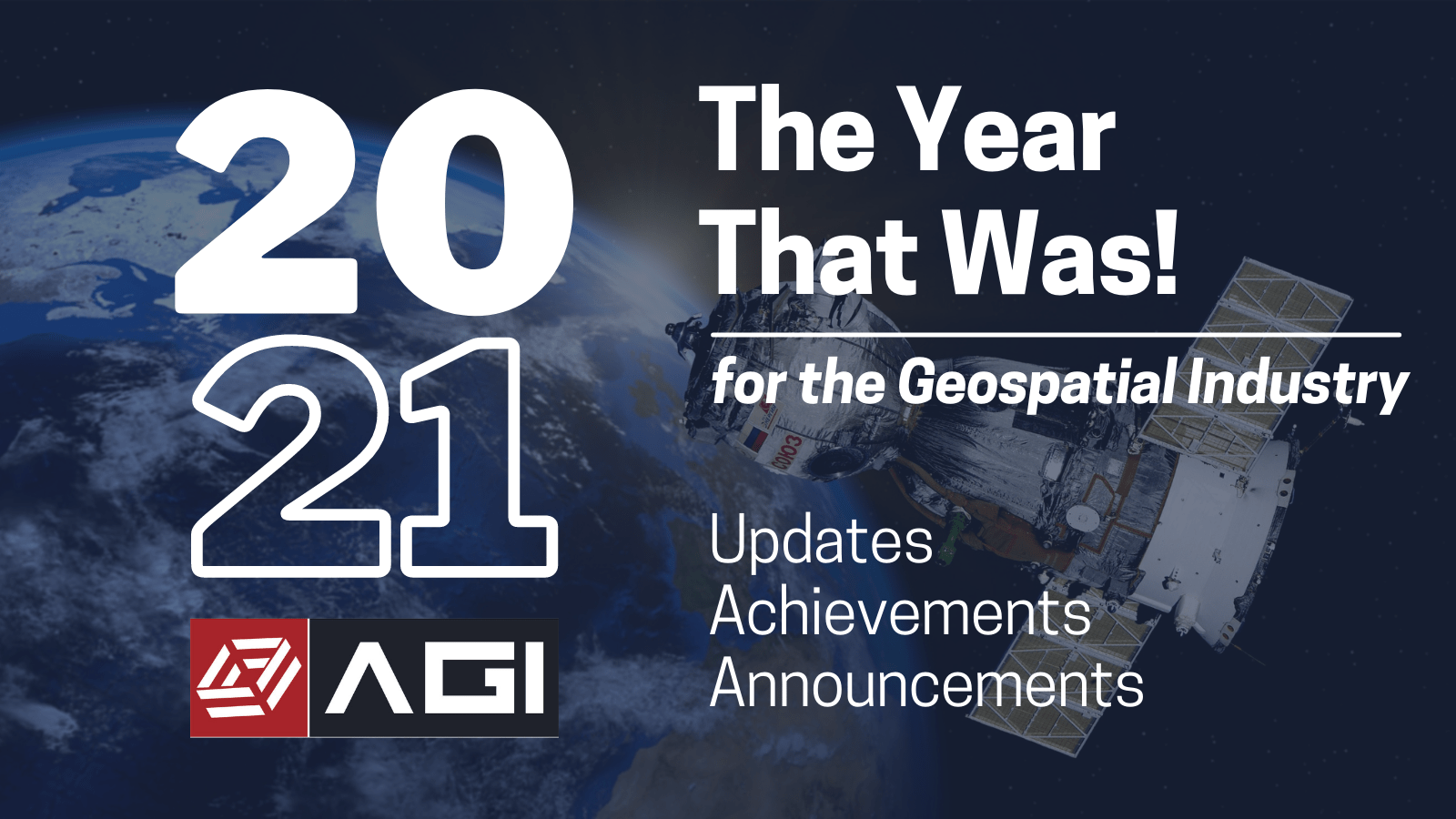 It’s a Wrap! Looking Back at 2021: A Brilliant Year for the Geospatial Industry

The year 2021 saw some landmark achievements for the Indian Geospatial industry as a whole, with the Government bringing out the new Guidelines for Acquiring and Producing Geospatial Data and Geospatial Data Services including Maps on February 15th, 2021. As we step into the new year, AGI attempts to take a peek into the year gone by, reviewing updates, accomplishments and announcements, while talking about the horizon ahead.

Major Boost to the Geospatial Sector by the Government of India

Apart from the announcement of the new Geospatial guidelines, the recognition of the value of Geospatial ecosystem in the country by the Prime Minister in his Independence Day Speech has truly been a boost for the sector. Add to that the various steps taken by the Government of India in alignment with the vision of a self-reliant nation.

On the policy front, the year also saw the announcement of the Draft National Geospatial Policy and Draft of Indian Satellite Navigation (SATNAV) Policy 2021, besides the introduction of new Drone Rules, 2021.

Technological interventions in the form of the MeitY and MapmyIndia-led UMANG app’s various map services shone bright. The application enables citizens to find government facilities nearest to their location, such as mandis, blood banks and much more, at the click of a button. The Survey of India stepped up its digital transformation vision with the launch of the SOI Online Maps and Data Portal and Sarthi Web GIS portal.

The year also saw the launch of the Gati Shakti National Master Plan for Multi-Modal Connectivity by PM and Geospatial Energy Map of India by NITI Aayog, both resting on the pillars of Geospatial intelligence, tools, and technologies.

Updates from the Association of Geospatial Industries (AGI)

For the Association of Geospatial Industries, the year brought new accomplishments and milestones, marked by the joining or renewed entry of 11 new members in 2021. Representing a wide variety of Geospatial stakeholders, five companies joined us in the Patron category, including Amazon Web Services, Genesys International, Google, MapmyIndia, and Oracle. The other companies to have joined us on board are Bhugol GIS, GalaxEye, GSL Geo, IIC Technologies, Prakhoj, and Roter Group of Companies.

AGI also signed a Memorandum of Understanding (MoU) with the Survey of India on Geospatial Skill Development in August 2021 for Geospatial skill development in the country. As the voice of the industry working towards knowledge generation, AGI released a report on Potential of Geospatial Technologies for the Water Sector in India. The industry report was released by Shri Rajiv Ranjan Mishra, Director General, National Mission for Clean Ganga, through an online event.

AGI was invited as a part of national organising committee for 2nd UN-WGIC, which is to be hosted in India with the Department of Science and Technology, Government of India, as its nodal organization.

AGI Members Showcase: The Year at a Glance

AGI’s enterprising members marked the year with a long list of announcements, achievements, and innovations. While enlisting all of them would be well beyond the scope of this compilation, we have put together an indicative list of some of the best highlights from our member companies all year round.

Esri India introduced the Indo ArcGIS this year, which includes ready-to-use data and solution products made in India for Indian users. They also published an open repository of Indian spatial datasets including villages level data and census data (300+ variables) on the ArcGIS Living Atlas, besides signing key MoUs with Amrita University to set up Centre of Geospatial Excellence , Kerala Digital University for mainstreaming of GIS courses into the curriculum, and the Ministry of Agriculture and Farmer’s Welfare to realize the vision of bringing India’s Agri-economy into a tech stack.

Genesys International launched its exclusive pan India 3D Digital Maps program, wherein it is working on the preparation of Digital Twins for 100 cities in the country. In November 2021, the company also filed for the registration of two patents – first, a unique 3D code to help pinpoint exact location of a given object on the 3D map, and two, automatic extraction of street furniture from panoramic imagery and LiDAR data for ground assets identification.

Google India partnered with Pune-based NGO Shelter Associates and UNICEF to provide independent digital addresses to around 9000 families living in slums across Pune, Thane, Navi Mumbai and Kolhapur through ‘Plus Codes’, based on latitude and longitude and displayed as numbers and letters. Features rolled out on Google Maps such as vaccine availability information, nearest test center locations, and Area Busyness feature to avoid crowds have helped millions during COVID times.

Hexagon Geospatial announced the Luciad 2021: a significant update to the Hexagon platform for building advanced location intelligence and real-time, along with HxGN Mass Transit, a geospatial transportation infrastructure management system with 3D and AI capabilities for visualizing and analyzing transit and rail assets and operations. They also released the M.App Enterprise 2021 for creating geospatial and location intelligence applications.

MapmyIndia launched a very successful IPO that was subscribed 155 times. The company also signed an MoU with MoRTH, GoI and IIT Madras for collaboration on driver and road safety technologies, and jointly launched India’s best and free-to-use navigation app service for all 130 crores+ Indians.

Maxar Technologies introduced the WorldView Legion, the next-generation Earth intelligence providing unprecedented visibility into out changing planet to solve the biggest challenges facing our world today. It teamed up with WWF-UK and the British Antarctic Survey to recruit citizen scientists for conservation efforts of Atlantic and Laptev walrus populations.

Oracle was empaneled by the Ministry of Electronics & Information Technology, Government of India, following a rigorous audit in August this year. As a result, governments and other public sector entities in India can now take advantage of Oracle’s second-generation cloud technologies and move their most challenging workloads, including Oracle workloads, to Oracle Cloud Infrastructure (OCI), helping accelerate the country’s ambition of becoming a 100 percent digitally empowered society and knowledge economy.

Planet was listed on the NYSE in December 2021 as a public benefit corporation, marking a monumental step in its journey to democratize access to satellite data to make change more visible, accessible, and actionable. They completed acquisition of VanderSat, set to advance agriculture data products to customers, besides bagging the Satellite Information Business award 2021.

TomTom launched the the world’s first open digital cockpit software platform called TomTom Indigo, giving carmakers and developers the building blocks to create a digital cockpit that feels like home on the road. Besides the opening of their new state-of-the-art office in Pune, the company also won the LinkedIn Talent Awards: Employee Engagement Champion this year.

Avineon launched the innovative and educative Avineon Vodcast, a series of knowledge sessions by Avineon leaders, on different topics in the field of engineering, spatial intelligence & digital modernization. It was also recognized as an Esri Cornerstone Partner this year in recognition of all customer successes and 20 years of close partnership.

Ceinsys Tech announced the acquisition of 100% equity in Allygrow Technologies – a technology-driven company with its presence in the US, Europe and India and specializing in product design and robotics information services. The company appraised at Maturity Level 5 on the CMMI (Capability Maturity Model Integration) V2.0 for Development and Services, conducted by the leading appraiser firm M/s Equalitas Certifications Limited, India.

NeoGeoInfo Technologies announced the dissolution of Zymax Technologies in April 2021, and its merger with NeoGeoinfo Technologies, strengthening its reach in East and Northeast India. NeoGeoInfo became a certified SEI CMM Level 3 organization for Geospatial Solutions and Services, besides completing project of CORS Establishment in 5 states (Punjab, Rajasthan, Haryana, Himachal Pradesh, and Madhya Pradesh, totaling to 214 CORS stations in 2021, in association with Trimble and Trimble Equipment.

NVIDIA collaborated with DeepMap Inc over smart transportation, while announcing a new supercomputer called E-II or Earth-II, combining all the technologies they have created till date.

Scan Point Geomatic’s application to track development of persons kept under quarantine both at home and state centers earned praise from far and wide. The company was able to win a contract worth INR 3.15 crore for Bihar Sharif Smart City Limited, which led to stock jumps of over 5%.

Geospatial World organized the first in-person event since the pandemic in Amsterdam in October and in Hyderabad in December breaking the long silence and isolation the industry felt. They launched the very insightful Geospatial Artha Report during GeoSmart India 2021 that estimated India’s geospatial commercial industry market in 2021 to be INR 14,050 crore, employing around 4,70,000 professionals in the country.

Roter Group of Companies is set to offer training to NIGST as part of AGI MoU with SoI. They also proudly announced the application of their drone Trinity F90+ for the PMO’s SVAMITVA scheme.

DronaMap earned praise from far and wide for their usage of drones to create 3D maps of cities in India to track COVID-19 hotspots. Their solutions have already been implemented in Rajasthan, Punjab, Chhattisgarh, and Haryana so far.

Prakhoj was one of the top 20 winners of iAspire, an all-women technology startup accelerator cohort organized by India Accelerator.

GalaxEye raised a pre-seed round led by Speciale Invest, and plans to use the funds to strengthen its space technology, building a “world class team India”. They also revealed a hybrid sensor combining optical imagery and radar sensing to provide data-as-a-service to commercial customers, tailormade to the deep learning applications in demand today.

The Road Ahead: Opportunities Galore

The interesting and ambitious landmarks that the Geospatial industry was able to collectively achieve in a single year reiterates its increasing significance and recognition in the Indian economy. It’s no secret that location intelligence is a critical part of the digital ecosystem, and if India is to achieve its vision of a self-reliant and digitally-empowered nation, Geospatial intelligence will be one of the founding pillars of such development. 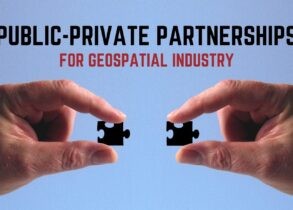 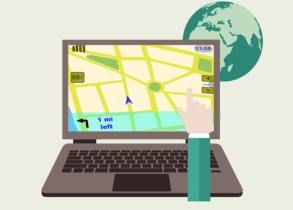